Posted on September 8, 2013 by comicspectrum 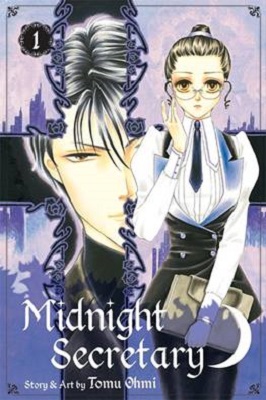 Kaya Satozuka could possibly be one of the most complex shojo characters I’ve ever read. She prides herself on being the consummate secretary, which had me wondering why she wasn’t setting her goals a little higher. Then writer/artist Tomu Ohmi throws out a nugget from her past that reveals why she’s working so hard to become the best she can be at her job, and it suddenly makes sense. She goes out of her way to be an ugly duckling around the office, hiding her looks behind fake glasses and pulled-back hair. So I’m ready for the eventual “roguish man to come in and save her by making her over” to reveal the swan underneath…only that isn’t going to happen. Kaya knows she’s cute underneath it all, and that’s the problem. She wants to be taken seriously, and with her youthful face and good looks, she knows that isn’t going to happen.

When she becomes the executive assistant to her company’s director, Kyohei Tohma, she feels like she’s arrived. Good money, respect, and a chance to make her mark in the world. So of course it’s a harsh blow when Tohma rejects her, saying she’s too plain-looking and couldn’t they find a more attractive person from the secretary pool to work for him. Determined, she proves her worth by becoming the best employee he’s ever had, despite the odd hours he keeps and the constant flow of women who come in and out of his office. When she finally catches him in the throes of passion with one of them, she’s not too shocked to see the fangs and blood come out, revealing him to be a vampire.

Most shojo love stories follow a pretty typical format, and this one seems no different. What makes a shojo story great, then, is good characterization, and this book seems to excel on that front. As mentioned Kaya is a fun character with some serious depth to her. Supporting the mother who single-handedly raised her while at the same time looking to find her own place in the world, she’s a step beyond your typical woman-seeks-man type of heroine.

Vampires are pretty commonplace these days, not only in manga, so as a writer it’s challenging to find a way to make yours stand apart. Kyohei doesn’t sparkle when he’s out in the daylight (and yes, he can go out in the daylight as long as the sun isn’t too bright). He doesn’t kill, merely draining his willing victims just enough to sustain him (they enjoy it, too, apparently). He doesn’t fear garlic or turn into a bat. He does have one particular weakness though…Christian religious symbols. While he holds his own against the sign of the cross, when he has to meet a business associate at a church, he’s left in a particularly weakened state, and thus begins a new level of relationship between Kyohei and Kaya when he’s forced to drink her blood.

This book won’t be for everyone. It’s a love story involving painfully beautiful and tormented men falling in love with waifish, doe-eyed women who must sacrifice their preconceptions to see the beauty inside. If that last sentence had you running for the hills, you might want to give this book a pass. That said, if you enjoy a good shojo tale, this one has the potential to be a really good one. Characters with a serious amount of depth to them help push this book beyond what seasoned readers may have come to expect from the genre.

The goal of ComicSpectrum is to provide a one-stop reference for everything about & related to comics and comics culture.
View all posts by comicspectrum →
This entry was posted in Viz Media and tagged manga, Midnight Secretary, Shojo, Tomu Ohmi, vampire, Viz. Bookmark the permalink.