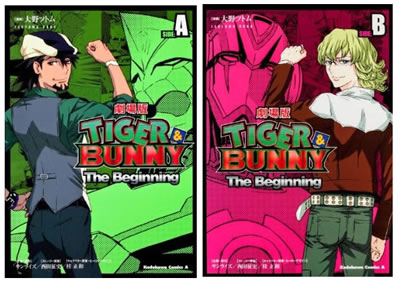 Rating: 4/5 – A Great Way to Re-Acquaint Yourself with the Superheros of SternBild

Viz seems to have invested heavily in the Tiger & Bunny franchise, and with good reason. The popular series has managed to cultivate an audience on both sides of the Pacific, and I’m happy to count myself among that number…although it did take a couple volumes before I was completely on board. With the release of a movie version that basically retells the origin of the dysfunctional duo (for those who missed it in the serialized anime or the original manga), it was no real surprise to see this two-volume set come out – the manga adaptation of the movie adaptation of the manga adaptation of the anime series. Whew!

This is a jumping on point for beginners only. Longtime fans of the series won’t see much new ground broken here, although collectors and completists will likely want the volumes for their bookshelves. Artist Tsutomu Oono does a great job of capturing the likenesses of all the popular characters, from Barnaby’s angular haircut to Wild Tiger’s perplexing beard to Blue Rose’s curves. For those who are further along in the series this might also be a good refresher course, although likely an unnecessary one.

The goal of ComicSpectrum is to provide a one-stop reference for everything about & related to comics and comics culture.
View all posts by comicspectrum →
This entry was posted in Viz Media and tagged Anime, manga, Movie Adaptation, Tiger & Bunny, Viz Media. Bookmark the permalink.