Posted on February 9, 2014 by comicspectrum 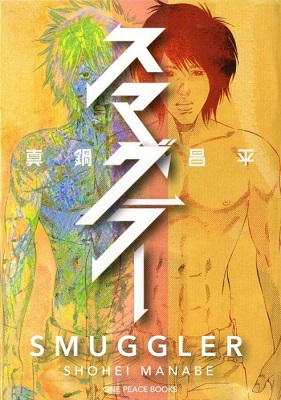 Rating: 2/5 – When the Opening Act Outshines the Headliner.
by ComicSpectrum reviewer Al Sparrow.

If you’ve ever gone to a concert and seen the opening act come out and positively destroy the headliner that brought them along for the tour, you’ll understand the problem with Smuggler. While the majority of Shohei Manabe’s book contains the titular work, an extra tale – “Violence Pokopen” – is tacked onto the end to add some heft to the book. The problem? The second story outshines the first one, to the point where I wished for more pages devoted to the second story and fewer devoted to the first one.

Smuggler tells the story of what happens to the body after the mafia hit has gone down. Usually someone has to come in and clean up the dirty work, and that’s where the protagonists of this story come in. It’s a side of the yakuza rarely shown in manga format (that space usually devoted to flashier things like firefights and the like) and because of that the story makes for an interesting read. Creator Shohei Manabe’s sketchy, rough style lends itself well to the seedy, ugly underbelly of the world we live in. The women are not drop-dead gorgeous or wide-eyed innocents in Manabe’s tale. The men are all scarred and generally unpleasant, with the exception of young Kinuta, a kid thrust unwillingly into this world and not sure if he’s cut out for the smuggling life. There’s little to find uplifting about this story, nor should there be, given its setting.

Unfortunately, Violence Pokopen outshines it in fewer pages. Here we’re given a protagonist worth rooting for as he discovers the man he truly is behind the weak façade he’s been wearing. As with Smuggler, the setting and action are crude, but work well with Manabe’s inkwork. Where the book utterly falls apart is providing too much Smuggler (including a prequel chapter at the end) and not nearly enough Violence Pokopen.

Smuggler promises to be unlike any other manga you’re likely to have read. It will be up to you to determine whether or not that’s a good thing. It’s a dark tale of world just outside our doorsteps, one we should be thankful we never see. Perhaps its greatest strength is also its greatest weakness. It’s almost too real for us to be willing to accept. That the bonus story in the book conveys a better tale in fewer pages also cripples its overall appeal.

The goal of ComicSpectrum is to provide a one-stop reference for everything about & related to comics and comics culture.
View all posts by comicspectrum →
This entry was posted in One Peace Books and tagged manga, One Peace Books, Shohei Manabe, Smuggler, Violence Pokopen. Bookmark the permalink.