Posted on February 14, 2014 by comicspectrum 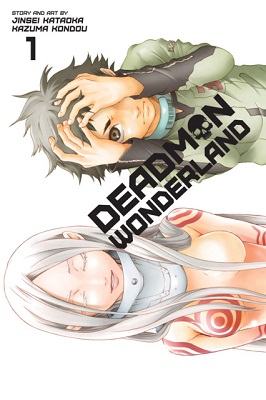 Rating: 3.5/5 – The Inmates are Running the Asylum.
by ComicSpectrum reviewer Al Sparrow.

Pity the poor city of Tokyo. Nothing good ever seems to happen to it when it shows up in a manga. If it isn’t a monster, it’s a madman bent on destroying it with a bomb or psychic power of some sort. In Deadman Wonderland, Tokyo suffered a massive earthquake that left it in ruins. A massive reconstruction project continues some ten years later, funded by proceeds from the eponymous amusement park/penal colony…yes, you read that correctly…that serves as the centerpiece of this story.

Ganta Igarashi finds himself a prisoner of this nightmare on earth when he’s the sole survivor of a massacre at his high school. It doesn’t take him long to learn the ropes, but with a collar around his neck injecting poison that will kill him if he doesn’t “buy” the antidote every three days (thus serving his death sentence) his chances look pretty slim. Fortunately he’s picked up a few allies who, if not willing to help him clear his name, at least are willing to help him survive. Still, can even these unlikely accomplices truly be trusted?

Deadman Wonderland asks readers to leap a huge hurdle at the very beginning. Ganta undergoes one of the quickest arrests, trials, and incarcerations you’re likely to see. It’s necessary of course, because the point of the book is to put him in prison and start the story from there, but it almost feels like the book is cheating. I would like to have seen just a bit more about his trial, prosecution, and defense. As it stands, he’s pretty much pronounced guilty right after his arraignment. It was difficult for me to accept it, though I did out of necessity, but I took it as a stumble on what promises to be a very good series over the long haul.

On the plus side is the character of Ganta himself. Set up against an absolutely hopeless situation, he only allows himself a moment or two to give in to despair before picking himself up and working to clear his name and do the impossible – escape Deadman Wonderland. Shonen characters tend to be very cookie-cutter, and Ganta certainly has moments of wide-eyed Goku-ness to him, but there’s something about this kid that almost makes you want to root for him. Having said that, I’m sure by volume ten we’ll have found something out about him that makes him totally repugnant, but I’ll be happy to be proven wrong by the end of this story.

Many fans have already experienced the world of Deadman Wonderland via the anime and its broadcast on Cartoon Network’s Adult Swim, but there’s plenty of incentive to pick up the manga as well. Jinsei Kataoka and Kazuma Kondou share the art and writing chores, and the collaboration serves this book well. There are moments where disbelief must be suspended, but as the “warden” of the prison says early on “Absurdity is your new reality.”  Believe it, readers, because this book has the potential to take readers on a ride no thrill-park could ever hope to offer.

The goal of ComicSpectrum is to provide a one-stop reference for everything about & related to comics and comics culture.
View all posts by comicspectrum →
This entry was posted in Viz Media and tagged Adult Swim, Anime, Cartoon Network, Deadman Wonderland, Jinsei Kataoka, Kazuma Kondou, manga, Viz Media. Bookmark the permalink.