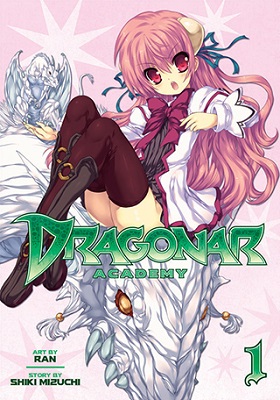 Rating: 3/5 – These are NOT the Khaleesi’s Dragons.
by ComicSpectrum reviewer Al Sparrow.

When the first panel of a manga shows a rendering of a woman’s shapely, curvaceous and most decidedly naked bosom (save for a pair of well-placed tattoos), alongside the words “First I see her breasts…” the tone is pretty much set for the rest of the book. Some of you have likely already stopped reading this review, knowing just from that first sentence it won’t be the type of book you’re looking for. Others have also stopped reading, in order to get to the bookstore or buy it online before all the copies are gone. Either way, I’d suspect nobody’s reading the rest of this review, but I’ll talk about Dragonar Academy anyhow.

Ash…no, not that Ash…is a young student at Ansullivan Dragonar Academy, where students are all trained to ride dragons. Each rider bonds with their own personal dragon in a lifelong unison. Of course it’s revealed – quicker than you can say “Anne McCaffrey”- that Ash has a unique talent: he can ride anyone’s dragon, an almost unheard of feat.  Fortunately it isn’t long before Ash finds his own personal dragon…in the form of a young lady. Ash is a bit disappointed, after waiting for so long, he’d been hoping for an actual dragon, but he decides to make the best of it and names her Eco.

Sounds like a wonderful, fantasy-filled story for young and old alike, right? Well, not so fast there…

Dragonar Academy’s first volume stands as a case study in fanservice. There must be a requirement in the city of Ansullivan that every woman wear a short skirt, and make no mistake, you will see the panties of each and every main female character not long after you’re introduced to them. But why stop there, one wonders? It’s not enough to have a strong wind fly through every other page to reveal the lacy undergarments of some hapless dragonrider. Some of the characters get straight up naked, particularly Eco. Dragons have no need to wear clothes after all, even when they look like perky, cute young girls. That most of the characters look like Precious Moments figures (look it up, youngsters) doesn’t help matters any.

That’s not a crack against artist Ran. If you’re going to draw women in various stages of undress, you might as well get someone who can do it well. Teamed up with Shiki Mizuchi, author of the original light novel on which the anime and manga are based, Ran does an equally good job rendering the dragons who appear in Dragonar Academy, and while Ash is your generic everyman-trapped-in-a-harem-manga hero, if you’re paying attention to him, you’re kind of missing the overall intention of the book. Indeed, it’s the artwork that’s the book’s saving grace, because otherwise this would be just like any number of books already vying for your attention on the shelves.

Stop me if you’ve heard this one before: A guy finds himself in a situation where a beautiful girl (also a total bitch) finds herself bonded to him and while they try to make the best of the situation, several other girls show up and make all kinds of passes at the guy until he finally finds the one he’s meant to be with. Along the way, there’s lots of gratuitous posing and the occasional nude scene. Ah, so you have heard that one before? I’m not surprised. There’s a lot of manga (and other fiction) out there that tell this very story, using these very tropes. Dragonar Academy does it as well…except there’s dragons involved. If that’s what you’re looking for – hop to it. If not, be sure to look up Hagani, Toradora, Zero’s Familiar, or any of the other books offering pretty much the exact same story…just without as many dragons.

The goal of ComicSpectrum is to provide a one-stop reference for everything about & related to comics and comics culture.
View all posts by comicspectrum →
This entry was posted in Seven Seas and tagged Academy, Dragonar, dragons, Fanservice, Fantasy, manga, mature, Seven Seas, Shiki Mizuchi. Bookmark the permalink.