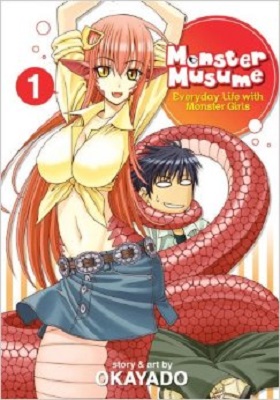 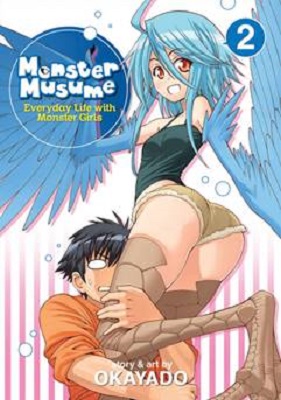 When Monster Musume was first released by Seven Seas, I was treated to a preview that basically told me everything I needed to know – or thought I needed to know – to know I didn’t want any part of it. Not only was it yet another harem manga, it was a harem manga that pretty much laid it all out within the first few pages. A lamia (half-woman/half-snake) wraps herself around the protagonist (your typical forgettable male) for warmth, then ends up having an orgasm when he tries to wriggle free, grabbing the extra-sensitive tip of her tail for support. This is the first five or so pages of the book. Nothing I need, so better to say nothing than just pick something up if I know I’m not going to care for it, right? Right.

Flash-forward to Comic Con International at San Diego, July 2014. I’m always happy to visit Seven Seas’ booth just to pick up volumes of a series I’m lagging behind on (in this case A Certain Scientific Railgun), and while chatting with the salesmen behind the counter, I noticed Monster Musume and asked them about it. “It’s the best title we put out,” one of them said. Because I’m a worldly and distinguished reviewer, I thought up my best witty retort…something that might reference Oscar Wilde or Dorothy Parker. Unfortunately all that came out was “Yeah, right!” or something like that. The other representative followed with, “No it’s really funny. You should definitely check it out.” I mentioned that I’d seen the preview, and while they didn’t deny the book’s not for the kids, they still maintained with enthusiasm that the read is worth it.

Not one to pass up a discount, and if for no other reason than to prove them wrong, I picked up all three existing volumes (that’ll show ‘em!), and after getting back from San Diego, settled in for an evening or two of monster women, sex, breasts, sex, a comedy of errors, and more sex. Did I mention sex?

And then something horribly wonderful happened…I started laughing. Yes, this book is everything my cynical side was expecting. It takes the basic harem manga formula (that aforementioned forgettable male x countless beautiful women who all want him) and increase the intensity by giving each woman a raging libido. In this case they’re monsters so that adds a bit of difference to the mix – the furry crowd ought to enjoy this book to no end – but creator Okayado manages to give each monster a personality that moves beyond the cookie cutter stereotypes so often seen in harem manga.

Miia (the Lamia) is overly possessive of Kimihito, the male protagonist, and I have to admit as someone raised on a diet of Keats and Greek mythology, it was kinda cool to see a Lamia show up in a book (aforementioned preview scene notwithstanding). Papi (the Harpy) has the attention span of a bird, and the speech patterns to match. Most of the laugh out loud moments came from her getting words wrong, replacing them with the most inappropriate ones the translation crew could allow. Rounding out the cast is Cerea (the Centaur) who speaks more regally and nobly than her competitors for Kimihito’s affections. She also has a bosom that defies the laws of physics – have I mentioned this book doesn’t shy away from the whole sex thing? Further volumes have brought in mermaids, slime people, ogres, Cyclops, and I’m sure we’re going to see many more before we’re through.

In spite of everything this book appears to be, there’s a charm hidden within its pages. I maintain that when it comes to harem manga, you really only need one in your collection. The story is essentially the same, and it just comes down to how the creators go about telling it. Having said that, Monster Musume is certainly a worthy candidate for that one harem manga to own. It’s definitely a bit more intense and explicit than other harem manga out there, but it’s also way more interesting a read than those other titles. And the Seven Seas salesman was right…it may well be the best thing Seven Seas has put out to date.

The goal of ComicSpectrum is to provide a one-stop reference for everything about & related to comics and comics culture.
View all posts by comicspectrum →
This entry was posted in Seven Seas and tagged Ecchi, harem, manga, monster musume, okayado, Seven Seas. Bookmark the permalink.