Posted on February 27, 2015 by comicspectrum 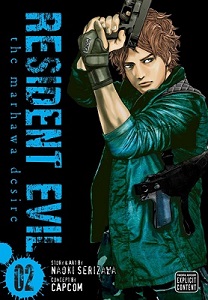 When these books showed up in my review stack several warning flags went up. It’s a manga based on a video game, and those are almost always a mixed bag. It’s about zombies, and if anything is played out right now in comics, it is the undead. It’s billed on the back cover as “The prequel to Resident Evil 6” which made me wonder how much of it is going to be left hanging to make way for the game itself. Having said that, there are also some definite positive considerations in play. This isn’t just any zombie franchise…it’s Resident Evil. It also benefits from solid artwork from writer/artist Naoki Serizawa (Saru Lock), who blends the gruesome and the gorgeous together nicely.

Still, for the purposes of this review, I’m going to treat these books as if they weren’t a part of a massively popular video game franchise – for both those positive and negative aspects I mentioned earlier – and instead look at them as if they were simply horror manga. Do they stand on their own merits or do they rely too much on references to the incident at Raccoon City, the Umbrella Corporation, and the T-Virus? Can I, not only as the reader, but as the reviewer, willfully ignore those aspects of the series and still enjoy the books for what they are?

Happily, the answer is yes. A huge part of that is due not only to Serizawa’s amazingly beautiful artwork, but also his ability as a writer, creating characters who are, naturally, tied in to the video game, but can stand on their own merits if you never popped a disc into your game console. A certain Mr. Redfield looks to be playing a predominant role in volume four, for example. If you’re unfamiliar with the franchise, he still comes off as an interesting character, but of course longtime fans of the series may enjoy his presence on a different level. References to longstanding tropes in the game don’t distract from a non-player’s enjoyment of the series.

That said, how well does this story stand up against the umpteen-hundred zombie comics available now? Certainly the tropes are there: A private school isolated from humanity (no cell phones) suddenly becomes a victim of a biological weapon turning the students into zombies. So you have a solid setting for the characters to play in, but it’s the characters themselves who make this a series worth reading. Following the “No One is Safe” paradigm common to many a zombie story, Resident Evil takes it a step further by throwing in a little bit of “Trust No One”. Every character in this book has an agenda, and the person you’ve been cheering for in book one you might find yourself booing in book three. There is no cut and dried good or evil, merely a group of people who each believe themselves to be the hero of their own novel. Oh, and there’s zombies.

I’ve come to love just about anything Viz puts out under their SIG banner, and it appears Resident Evil: The Marhawa Desire, despite being a video game franchise story, easily joins that company. It’s able to present an entertaining story that should thrill longtime fans of the videogame series, but without alienating total newcomers who might be intimidated by that tie-in. Serizawa has kept me guessing throughout these first three books, and I’ll be coming back to see where volume four takes me.

The goal of ComicSpectrum is to provide a one-stop reference for everything about & related to comics and comics culture.
View all posts by comicspectrum →
This entry was posted in Viz Media and tagged Horror, manga, Resident Evil, Seinen, Video Game, Zombies. Bookmark the permalink.