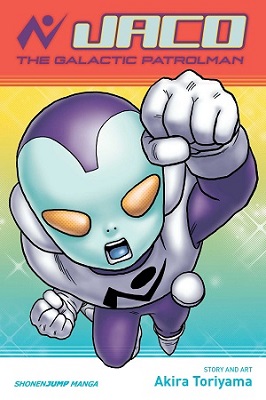 Rating: 5/5 – A Prequel (of sorts) to a Manga Classic.
by ComicSpectrum reviewer Al Sparrow.

Let’s get the obvious out of the way right now – if Akira Toriyama’s name is on it, I’m going to pick it up (and so should you). Few artists have had as profound an influence on those who came after them as Toriyama has had. Dragon Ball alone stands as a manga that caused many a budding creator to pick up their pencils for the first time. So the recent publication of Jaco, the Galactic Patrolman, Toriyama’s latest release, should be an automatic buy for many fans. It basically confirms that no matter how influential your past material has been, your work doesn’t have to end.

And now that the obvious is out of the way, let’s talk about whether or not the book is any good.

Jaco, an overly confident spacefarer, crash lands on earth. With his ship damaged, he finds himself forced to rely on the few humans he meets, each with their own story to tell. Omori is a reclusive old man working on a time machine for a reason best left for you, the reader, to discover. While attempting to repair Jaco’s ship, the pair meet a young woman named Tights, also the bearer of many a secret best left for the individual to discover. The great thing about Toriyama’s books, and perhaps one of his greatest strengths, is creating characters you almost immediately fall in love with. You’ll laugh at their antics, shed a tear at the tragedy behind their stories, and if you’re not careful they’ll become a nice part of your literary life.

The humor, as with the aforementioned Dragon Ball, is unapologetic in its ability to sneak up behind you when you’re not paying attention. When I suggest Toriyama’s work to the uninitiated, their first reaction is usually what they’ve seen from the anime of Dragon Ball Z – two guys standing on a field yelling at each other for half an hour – and that’s a tough stigma to overcome. What usually blows these same people away is just how funny Toriyama’s work is. The jokes fly in unexpectedly (I nearly dropped the book laughing when Tights asked Jaco about how he performs a certain bodily function) and it states what most Toriyama fans already know: If you think it’s just about fighting, you’ve got some reading to do. This book will sit nicely beside Sandland, Cowa, and other great Toriyama one-shots on my shelf.

Sometimes we forget, in the grim and gritty world that comics have become, that they should occasionally be allowed to make us smile, forget our cares, and just enjoy the fantastic wonderment of a world we wish were real. This is the brush Toriyama paints with, and if you’re looking for a good place to start (a bonus story of the origins of Dragon Ball is included), you can’t do much better than Jaco, the Galactic Patrolman. Heck, if you’re just overdue for a smile, you should do yourself a favor and pick it up.

The goal of ComicSpectrum is to provide a one-stop reference for everything about & related to comics and comics culture.
View all posts by comicspectrum →
This entry was posted in Viz Media and tagged Akira, Dragon Ball, Humor, manga, Space, Toriyama. Bookmark the permalink.