Posted on August 7, 2015 by comicspectrum 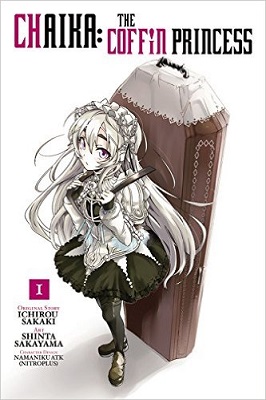 Rating: 3.5/5 – By Any Means Necessary – Decrease the Peace
by ComicSpectrum reviewer Al Sparrow.

One of the worst things that could happen to a sword-for-hire is, of course, a long stretch of peace in the kingdom. In the case of Toru Acura (the aforementioned sword-for-hire) it’s turned him into a veritable slug of a human. He spends most of his mornings in bed, until he’s forcibly removed by his fellow mercenary and sister Akari. This usually comes in the form of her repeated threats to kill and stuff him like an animal, since that’s all he’s virtually good for at this point in their lives. With no battles to fight, and no enmity going on between rival nations, there’s little work for Toru and Akari, so they’re forced to do whatever they can to survive. It’s a fun flip on the usual manga fantasy yarn where a great turmoil has overtaken the land, or two clans are continuing their never-ending feud. No, this time everything is hunky-dory in the realm, and it’s taking its toll on the local formerly violent-prone population.

Of course, such a situation could never last, or we wouldn’t have much of a story, would we? It isn’t long before Toru is out foraging for breakfast, and comes across a silver-haired girl – Chaika Traibant – carrying a massive coffin on her back. Assisting her in evading an attack by a mystical creature, he learns she’s a wizard on a quest, and in no time he and his sister finally have work assisting her in completing it. The true nature of that quest will have to wait until the next volume, but there’s enough going on here to make that second volume worth seeking out.

I really enjoyed Shinta Sakayama’s art. The crisp, clean linework brings out so much detail in everything from Chaika’s lolicon-oriented outfit (which if this series takes off in the U.S. I would imagine many a cosplayer will attempt (if they aren’t working on it already)) to the magical beast she and Toru fight in the introductory chapters. Characters are given enough individuality in their makeup to keep them interesting and the action sequences are quite simply some of the best I’ve seen in a manga.

Where the book might stumble, and this is up to the individual reader, is when it gets a little too drawn into tropes and clichés that have been done a bit much lately. That the book starts out with Akari hitting on her brother – something I’m seeing a lot these days in manga – had me thinking that this was going to be another one of “those” type of books. By the end of the volume, I’m convinced it isn’t going to be, but the hint was there. In addition, some of the more tried and true manga mainstays are there: There’s no doubt Toru and Chaika are the romantic leads, the peace over the land is certainly going to be ending soon, and rival groups suggest a much more intricate plot will be coming in future volumes.

Chaika, the Coffin Princess has a pretty solid first volume under its belt. Whether it will be enough to get readers to jump to future volumes remains to be seen. It seems to walk a tightrope between forging new ground in storytelling while not straying too far from the more comfortable plot devices common to most manga. Whatever the case, the artwork is gorgeous and well worth sampling if you’re a fan of the genre.

The goal of ComicSpectrum is to provide a one-stop reference for everything about & related to comics and comics culture.
View all posts by comicspectrum →
This entry was posted in Yen Press and tagged comics, Fantasy, manga, Yen Press. Bookmark the permalink.