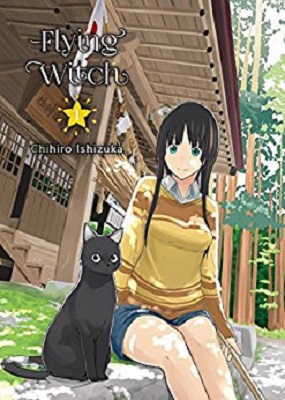 Rating: 2.5/5 – Check Out the Anime Before Investing Too Deeply in the Manga
by ComicSpectrum Reviewer Al Sparrow

Fan that I am of the printed page, it’s often difficult for me to recommend checking out the live-action or animated version of a story over something that exists in book form. Having seen Flying Witch in both the anime and manga formats, however, I’m hard pressed to recommend eschewing the former for the latter. It’s particularly difficult when the book comes from Vertical, a company I’ll own up to having a favorable bias toward. I tend to love their books, particularly recent releases like Nichijou and My Neighbor Seki.  I was looking forward to Flying Witch being a solid addition to their growing stable of great titles. Sadly, I made the mistake of checking out the anime in advance of this book’s arrival, and while that may have unfairly influenced my outlook on the printed version, it’s still a comparison worth noting.

Makoto Kowata, the titular witch in the series, is returning to her rural roots to complete her training and become an actual bona-fide witch. She moves in with her cousins, one who knows about her profession and another who is about to find out, and begins a life of misadventure after misadventure. Our heroine, while knowledgeable in the realm of witchcraft and spellwork, has much to learn about how the real world operates, and it’s these flaws and foibles – such as a notoriously poor sense of direction – that make her such a fun character. She doesn’t know it all, but she knows enough to be dangerous.

There seems to be a growing trend these days for witch-centered titles. Maybe they’ve become the flavor-of-the-month (year?)(decade?) but there have been a number of books and anime showing up lately involving our pointy-hatted cauldron-brewing baba yagas in training. For someone like me who has been enamored of witches since cowering in fear at Margaret Hamilton many years ago when I first saw The Wizard of Oz, this is truly a great time to be a manga lover. At the same time, there seems to be more and more light-hearted, so-called “slice of life”, stories showing up, and in my book that’s also a great thing. They can’t put out new books of Non Non Byori or Nichijou, for example, fast enough to keep me happy. Despite what you may hear, there’s nothing wrong with wanting to read a book that simply makes you smile and feel good about the world. Combine this type of storytelling with a witch protagonist, as they’ve done with Flying Witch, and you’d think a reader like me would be in heaven.

So why, then, would I start this review suggesting you check out the anime over the manga? Either way, I recommend experiencing this story, particularly if you’re a witch lover like me, but the anime takes advantage of the fact that it’s an anime and comparing it to the manga only showcases the shortcomings of the printed page. For one, Makoto inhabits a gorgeously rendered world, and the wonder and awe she expresses at her surroundings are better captured in the multi-colored realm of the anime. The “sets” (aka the backgrounds, buildings, and cityscapes) are gorgeous in the anime and they just don’t translate to the black and white of the manga. There too, the pacing of the jokes in the story are better served when the animation can expand on something only hinted at in the manga. Read the early story about Makoto picking up a mandragora for her new friend Nao, then watch the animated version, to get an idea of what I’m talking about. The anime can get away with things the manga cannot, and the experience is simply better viewed on a screen than read on a page this time around.

Whether you choose to read or watch the story of Flying Witch, it’s one well worth checking out if you’re a fan of witch-based stories or slice-of-life-I-just-want-to-relax stories. If you’re into both, it’s a no-brainer to check out. While the old saw is to say that the book is superior to the movie, or in this case animation, I found the reverse to be true.  Experience it however you choose, but by all means, experience it.

The goal of ComicSpectrum is to provide a one-stop reference for everything about & related to comics and comics culture.
View all posts by comicspectrum →
This entry was posted in Vertical and tagged Flying Witch, manga, Vertical, Witch, Witchcraft. Bookmark the permalink.