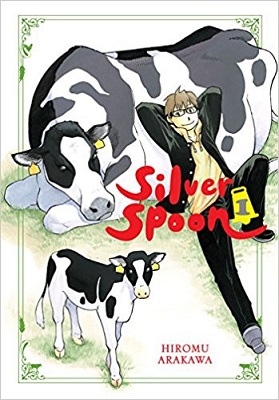 Rating: 3/5 – A Good Story Held in Check by a Boring Protagonist
by ComicSpectrum reviewer Al Sparrow

A good story usually needs a solid cast of characters to become a great one. Silver Spoon is a good story with a very good cast of characters save for one…the protagonist. Sadly, that one character might be enough to drag a potentially great book down to becoming an utterly forgettable one. We’ve traveled that road before – or at least I have – finishing a title only to wonder what it is you just spent the past hour or so reading. I felt slightly cheated after Silver Spoon Vol. 1. It was well-written, with good artwork, and it was about farming, which this Harvest Moon/Story of Seasons junkie will tell you is his favorite video game genre. Should be a shoe-in for me to love, right? But it wasn’t. And it isn’t. And now I need a scapegoat for that.

I’m going with Yuugo, the main character. He’s a high school student, brilliant, friendly, and utterly unchallenged by life. He enrolls at Ooezo Agricultural High School because for some reason he wants to be away from everyone and he figures it’ll be a string of easy A’s for him. This desire for solitude is never addressed, other than he wants it. It helps for a story to develop at least some amount of sympathy for the protagonist at some point, and usually early on, but this first volume never did. He’s very much out of his element amid all the more practiced agricultural kids who came from family farms to train at the school, and that could make for many fun scenarios…if he were at all likeable. But he wasn’t. And he isn’t. And now I need a scapegoat for that.

Hiromu Arakawa does a great job illustrating (in both words and pictures) the difficulties of farming through the lessons Yuugo learns at the school, and by making friends with his more studied peers who have grown up around this kind of life. The inclusion of Yuugo as a character makes sense. There’s wonder in everything he experiences, but without knowing a lot about how his past influences that sense of wonder, it’s difficult to identify with him very much. And we can’t. So we don’t. And if I have to keep looking for scapegoats, I might as well throw in the towel.

An anime exists of this series, and I may find myself checking it out as opposed to the manga version. I tend to gravitate toward stories that are relaxing, idyllic, and slice-of-life where anime is concerned, and that looks like the type of story Silver Spoon is trying to be. Maybe Yuugo will be portrayed differently than he is in the manga, or at the very least we’ll get to what makes him tick a bit more quickly. There’s an audience out there for this type of story, but I’m not sure the manga version is the best way for that audience to experience it.

The goal of ComicSpectrum is to provide a one-stop reference for everything about & related to comics and comics culture.
View all posts by comicspectrum →
This entry was posted in Yen Press and tagged Farming, manga, Silver Spoon, Yen Press. Bookmark the permalink.