Posted on February 17, 2014 by comicspectrum 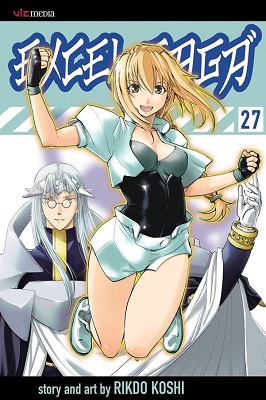 Rating: 5/5 – Saga’s End. Now you can start at the beginning.
by ComicSpectrum reviewer Al Sparrow.

Why would ComicSpectrum review the 27th volume of a book? Well, it’s the 27th and final volume of a series that’s been in publication since 2002, has never truly raked in strong sales (compared to manga like One Piece which has sold in one volume what the entire run of Excel Saga has sold), and is extremely difficult to follow if you don’t know your anime/manga tropes and history. And despite this, Viz published the whole thing. For that, we thank them, we salute them, and we’re giving the last book…indeed the whole series…a moment in the spotlight.

Loving Excel Saga is a lot like loving the band Rush. It’s almost like a cult, albeit one with good enough numbers to keep the series in print. The series is darn near indecipherable at times unless you live, breathe and sleep anime and manga (despite the best efforts of adapter Carl Gustav Horn’s Oubliette section which did its level best to explain all the references it could at the end of each volume). It moves at a breakneck pace and you will be re-reading certain sections because you did miss something. The humor is a lot like Mystery Science Theater 3000 – you won’t get every joke or every reference, but the ones you do will have you laughing out loud.

So the real question, now that we’re at the end, is…does it end well? The answer is a resounding yes. Creator Rikdo Koshi is either a genius or a madman to be able to throw so many plot points out there and still be able to reel them all in before the final curtain is closed. Any time you have an ensemble cast you’ll develop favorites as a reader, and you want them to have happy endings. I’m happy to report all of mine did. Even the characters I wasn’t totally crazy about still managed to end their stories well, and all in this one volume.

Fans of the anime in particular should be picking this series up, because it takes the madcap humor of the series and amps it with things Koshi couldn’t put on television. Sure, twenty-seven volumes is a heavy investment (It took me 10+ years to get to read the whole thing!), but if you love manga and anime, Excel Saga exists as your Monty Python. If you only watched the anime, you totally missed out on the character of Elgala…and yes, you missed out if you missed her.

Sometimes readers will hold off on collecting a manga series because they’re not sure if the complete run will ever be published. It’s certainly happened in the past. With the publication of volume 27 of Excel Saga, the series has reached its conclusion, and if you’ve been depriving yourself of this hilarious satire of all things, you have some serious catching up to do.

The goal of ComicSpectrum is to provide a one-stop reference for everything about & related to comics and comics culture.
View all posts by comicspectrum →
This entry was posted in Viz Media and tagged Anime, Excel Saga, manga, Rikdo Koshi, Viz Media. Bookmark the permalink.